…Fear is my big thing….  I hesitate before I do everything and then it’s too late to do it.  If I could just get the courage to go ahead, but something seems to be always pulling me back.  Two weeks ago I missed the offer of a better job… and my friend gave me a big lecture on fear.  I know she’s right, but I'm still the same.  I feel worse…. I said God is looking after me and she said that's rubbish, I have to do some looking after myself.  Have you any advice you can give me?  Leah

Don’t be surprised to find fear in your system; it is in everyone’s system.  We have that (and a lot more) in common with the animals.  In fact we have much more fear than the animals have.  They don’t spend the best years of their lives worrying about their health, or the future, or death - or all the ‘what-ifs’ that we waste our energy on.  Someone suggested a diagram to illustrate the difference.  The animals are like a perfect circle on a page: they are self-contained, complete.  Birds, for example, have been building their nests in the same way for tens of thousands of years; evolutionary change is so slow that it scarcely registers.   But human beings are like a circle with a break in the circumference: then everything on the outside can flow in, and everything on the inside can flow out.  We can think a thousand things – things the animals are blissfully unaware of – and every one of those things can channel fear into us.  We have what has been called the ‘wound of knowledge’.

The capacity to see beyond what is tangible: that is indeed a kind of wound.  I'm sure it is far more difficult to be a human being than to be an animal, but would we want to change places with them?  Are all wounds bad?  Isn't our kind of life worth it?  Don’t come down too hard on yourself for knowing the grip of fear.  It goes with the adventure of being a human being.  Without it, our species would not have survived.  We have more reason to be afraid than the other animals do.  Many of them have far greater physical strength than we do, or a greater ability to escape through speed or flight, or to sting or poison their aggressors, or to hide and camouflage themselves…. But, as Gary Larson noted, human beings are very vulnerable, and we seem ill equipped for survival: 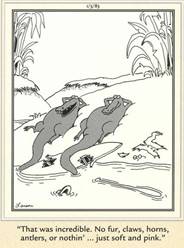 We have to find ways of living with fear – befriending it, as they say, since it is here to stay.

Did you ever read about the little boy who lived in a cottage in the middle of the forest with his grandmother?  He used to venture a little into the forest, but a black cat would always appear and begin to follow him.  He was afraid of cats and he would run away.  But the cat always followed and – strangely – used to grow in size, terrifying him all the more.  He told his troubles to his grandmother (a wisdom figure surely) and she said: “The next time the cat follows you, don’t run!  Stand still and look at it.”  The prospect terrified him even more, but the next day, as he was fleeing, he remembered her advice, and when he glanced around, he noticed that the cat hesitated slightly.  This gave him a little courage, and as he slowed down.  He noticed that the cat slowed down too.  Now he stopped and stared at the cat.  To his surprise the cat stopped too.  As he continued to stare, the cat began to get smaller, until it was the size of a normal domestic cat.

The forest is the unknown that surrounds us on every side.  We cannot live our lives inside the cottage; we have to venture out.  But we have the word of wisdom in our memory: Look at the cat, look at the things that terrify you.  That will not make them disappear, but it will reduce them to their proper size.  Fears become exaggerated when we run away from them; they can terrify you only from behind.

Your friend told you it was rubbish to think that God looks after you.  Let me tell you a story about another little boy, a real one this time.  Prasad, an Indian friend, described to me his first journey to secondary school many years ago.  His father drew a map of the complicated route through the bustling city, and went over it many times with him: ‘Take such and such a bus; get off at the corner where you see the very big red building on your left; cross the street; take such and such a tram; get off after five stops; walk to the next corner; take any bus for three stops, etc., etc.’  The day came, and Prasad left home, full of apprehension.  A few times he felt lost and terrified, but he kept going, and was greatly relieved when he saw the school-gate his father had described in detail.  As he walked through it he glanced around, and there he saw his father!  His father had followed him all the way – but out of sight, so that he would find his own way.  Think of God looking after you like that – not taking over from you the living of your life, but, as the psalm says, “Like an eagle watching over its nest, hovering over its young.”

This is our Question and Answer desk.
We respond to one question each month.
If you would like to ask a question, please send it to
question@goodnews.ie