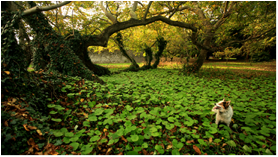 Maelruan’s tree was two hundred years old when I saw it for the first time fifty years ago.  It is a strange and fantastic tree, defying all but the simplest classification: there is no doubt that it is a walnut, but generalisations end there.  It is impossible to describe its shape, or even to see it all from any one point.  It stands in the garden of the Dominican Priory in Tallaght - or rather it sprawls there, with a spread of one hundred and fifty feet.  Children love it: they run to it and climb all over it, like climbing onto their grandfather’s lap.

Walnut trees were introduced to Ireland in 1760, and experts say that this tree was one of the first.  It led a peaceful conventional life until 1797 when a severe storm almost destroyed it.  But that was not to be the end.  Where the partly-severed branches and the split trunk touched the ground they took root and clung to life.  But from that time it was a life on different terms: the parts were semi-independent, and eager to go their own ways.  One major branch ventured too far and was lost in a storm in 1946.  Today as you sit under this tree you feel you are not in an ordinary world where things are comfortable in their categories.  It is a tree, yes, but it is much more like a grove; it is a ‘thing’, yes, but much more like a place.   We say: person, place, or thing.  It is a thing, and a place, and there are times when it almost seems a person.

If it doesn’t fully qualify as a person, at least it has much in common with us.  Like most people, it had trauma in its early life; like every one of us, it has dead parts, and parts that will never be any better, and parts that have to be propped up, and parts hanging on at crazy angles, and parts that don’t know whether they are growing up or down, and parts reaching straight up to the sky….  And there are weeds all around.  Yes, it is very like us.  And despite all its defects and deformities it gives a full crop of walnuts every year.

Sitting under its full canopy I often wondered how we might respect the place-like qualities of this extraordinary tree, using it as a place of meditation, for example, or a place to celebrate the Eucharist…. The floor is a rich bed of cabbage grass, which is one of the few plants that would thrive in these conditions.  It looks all right, but it doesn’t invite you to walk there….  Despite a lot of looking and pondering, nothing clear ever came to mind.  As a last resort I thought of putting decking in one section.  I mentioned this to an artist friend who is as besotted with this tree as I am, and she said, “Don’t you dare!”  So I didn’t dare.  “Don’t add anything that would distract from the tree itself,” she said.  So I didn’t.  And then, as the seanachai said, things rested so.

A year later she visited again.  She asked for a few garden tools and went to work while I was elsewhere.  When I came back I found that instead of clearing away the cabbage grass she had made four curved pathways through it to parts of the tree that were conveniently horizontal; they were like an invitation to sit down at the very heart of the tree.  She had followed her own advice, adding nothing that would distract from the tree.  She had added nothing at all, but taken some things away.  It was a stroke of genius.  If the whole area had been levelled or landscaped it would just lie there featureless and purposeless.  But a path invites you in.

The paths are like an invitation into the heart of your life, to sit at peace there and not go crazy.  All around you are the haphazard shapes of the tree, just as chaotic as your own life.  This tree recognises shapes and spaces and misdirections that no rule-bound person would respect.   Better, it tells you that nature herself embraces you in all your crazy particularity.  You live in a rectangular house, you look through perpendicular windows, you eat and drink from circular plates and cups – you live in a geometric world.  Your mind learns to follow these easy shapes, and soon you think that they are the only valid ones.  If you hadn't noticed that nature pays little attention to these shapes, this gentle giant, by embracing you on all sides, awakens you into recognition.  It doesn’t shy away because of anything failed or misshapen in you.  It enfolds you in mercy and understanding.

Dead trees have always moved me strangely – moved me to haiku a few times:

Pine felled by the storm -
I sit down beside its head
intimate with death.

Standing on the spot
where once stood a much-loved tree
I almost am it.

Maelruan’s tree lies on the ground for us – like the Incarnation of the Word.  “When Adam fell, God’s Son fell,” wrote Julian of Norwich.  There is a story about an old man who lived with his daughter.  One day as they were walking he tripped and fell.  She fell down beside him.  “Why did you fall down?” he asked her.  “To help you,” she said.  To help you by being helpless with you.  This ancient tree bends low to be with us, it lies beside us on the earth in a great gesture of renunciation, empty of power and glory.  One part is dead, but it rests there in peace with the living.  Death is brought in from the cold and included as a portion of our life.

The seasons pass over Maelruan’s tree – or rather, they pass right through it.  In the autumn and winter it is bare and roofless; it looks empty and desolate, all its misdirections plain to see.  If you have courage to sit with it in those seasons you will find yourself in the company of Mary Magdalene waiting at the tomb.  Despite all reason and logic, there is something not concluded.  Amid all the loss, there is something not lost.  You sit in hope, not knowing what you are hoping for.  It is good that you don’t know, because when the new deed shows itself it will be new.  You will not recognise it.  You will not recognise it until it speaks your name.

These are brief articles, one per month,
on a wide variety of topics concerning the living of the Christian life.