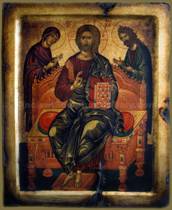 If you understand that the incorporeal One became flesh for you, then it would be evident that you can make his human image.

Since the invisible One became visible by taking on flesh, you can fashion the image of him whom you saw.  He who has neither body nor form nor quantity nor quality, who goes beyond all grandeur by the excellence of his nature, he, being of divine nature, took on the condition of a slave and reduced himself to quantity and to quality by clothing himself in human features.  Therefore, paint on wood and present for contemplation Him who desired to become visible.

Never will I cease to honour matter through which my salvation was wrought…!    Because of this I salute all matter with reverence, because God has filled it with his grace and power…. Do not despise matter, for it is not despicable.  God has made nothing despicable….

It is obvious to everyone that the Godhead is incomprehensible and uncircumscribable, and I may add: boundless, limitless, formless, and whatever adjectives signify the privation of what the Godhead is not….But because of his great goodness, one of the Trinity has entered human nature and become like us.  There is a mixture of the immiscible, a compound of the uncombinable; that is, of the uncircumscribable with the circumscribed, of the boundless with the bounded, of the limitless with the limited, of the formless with form (which is indeed paradoxical).  For this reason Christ is depicted in images, and the invisible is seen.  He who in his own divinity is uncircumscribable accepts the circumscription natural to his body.

In their many different idioms the classical spiritual writers have attempted to throw light on the eternal question of union with God.
Every month we give you a brief passage from a spiritual classic.