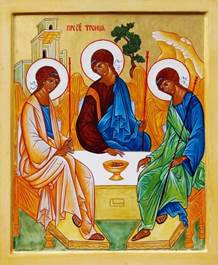 They are sitting all together at the same table, drinking from the same cup.  They share the same meal….

The three persons are united by the possession of a secret.  This secret is their relationship, their love.  The how and why of this love will never be deciphered, never wholly uncovered.  It is an incommunicable secret and fullness which they communicate.

What the three Persons give and communicate to one another is the depth of their being.  This sharing makes a communion that no human sharing can achieve.  This gift is the sharing of what each one has that is beautiful, true and luminous.

Gazing at the three faces raises the question, “Who are they?  What are they saying?”

And we, in our silence, can perceive something of this secret....

The heads leaning towards one another can be seen from a distance – it looks as if they cannot stand being apart at all – each one is there only for the other, and they cannot cease gazing at one another – they are fascinated by the others.

“Do you not know that I am in my Father and the Father is in me?”  Each one of them is giving himself to the others, defenceless before the invasion of the other.  That is why their faces are full of an infinite tenderness, the tenderness that is without resistance before what the other offers or asks.

And what if in front of humankind they are in this same attitude of total non-resistance, vulnerability and defenceless tenderness...?  How can one describe it?  More than ever, words are of no use before such a mystery....

But why is there a space, something that expresses an opening-up right in the foreground of the icon?

The circle is closed on all sides.  In the background the group of angels is protected by their wings; it is only below that there is an empty space, repeating the shape of the chalice, and opening up towards the altar.  Is there going to be a third guest?

Is your happiness incomplete so long as this place remains empty?

They are waiting for you: as if there were only you in the world.  You are so precious in their eyes.

“He chose us before the foundation of the world...that we should be holy and blameless before him, and live in love in his presence.”

“Pay attention, remotest peoples: Yahweh called me before I was born.  From my mother’s womb he pronounced my name” (Jeremiah 49).

Can you not hear a stream within you whispering, “Come to the Father?”  Can you not hear his own voice, “You are always with me.  All I have is yours?”  “I no longer call you servants but friends, because all I have heard from the Father I have told you.”  “You will no longer be called Forsaken, but you shall be called My Delight.”

In their many different idioms the classical spiritual writers have attempted to throw light on the eternal question of union with God.
Every month we give you a brief passage from a spiritual classic.